The sun is barely rising over the horizon. Runners are checking in to begin the festivities. It’s cold. You can see the cool chill in the air through each conversation. Families and single runners alike circle the event grounds before the race begins. One Grinch appears with his dog Max, prepped for the barrage of curious spectators around them. The Pumpkin Run 5K is not just about the running. It is about family, about enjoying a morning with those who are closest to you. Having fun dressing up in costumes with people and providing the opportunity to do that for others in the community who cannot afford to do the same. 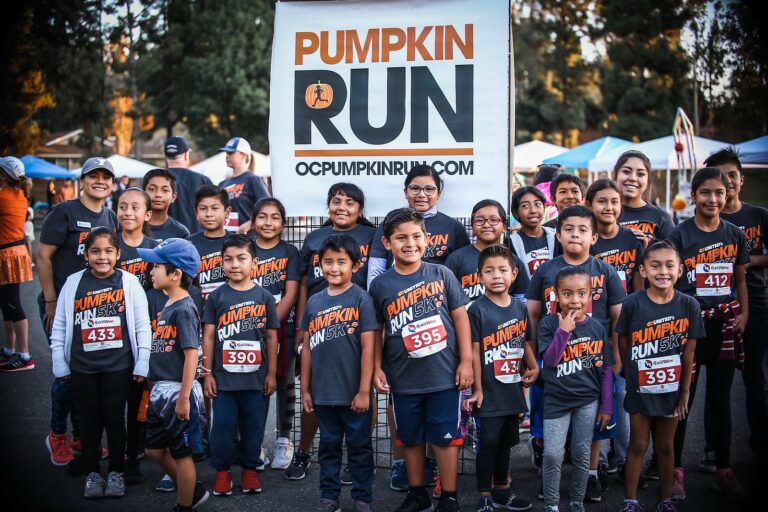 This year, the Pumpkin Run 5K had 500 runners participate in the race on October 26th at the Fullerton Loop. Support poured in from all over the community. Including an appearance from the familiar and hilarious Chick-fil-a Fullerton cow that also ran in the race along with the other participants. The Fullerton Police Department provided safe passage for runners along the path but also any passerby in need of access to the roads that the loop may have passed through. It seemed as though everyone at the 5K was in high spirits, but none more than our sponsored students and families from our community initiatives.

The students with our United Kids program were invited and sponsored to be at the race on the 26th. The kids arrived from all over the community by the busload. Literally. Our United Kids program hosts 40-plus elementary school students at Valencia Park Elementary on Tuesdays and Thursdays after-school to provide tutoring, academic support and mentorship. During our time there we have seen the lives of students change as well as the lives of their families.

One of our students named Jose Angel has been one of the shining lights in our program. At first, he was not interested in interacting with the other students in the program. It was too much, he was shy and would isolate himself from the other students. However, Shelby Bell, Volunteer & Event Coordinator for OC United, who also volunteers her time personally in the program, began noticing Jose Angel’s absence from the rest of the group. Over time, a relationship grew between Shelby and Jose Angel. As their friendship grew, so did Jose Angel’s willingness to participate and join the other kids. Jose Angel lives with his grandmother. She was so grateful for Shelby and the love that she has given to her grandson. Both Jose Angel and his grandmother were able to attend and participate in the Pumpkin Run.

Our 5K was more than just a costume fun-run. This race was about providing a space for the community to come together and enjoy a morning of fun no matter where one might be coming from in the community. We are so grateful and thankful for all of our sponsors that attended and provided so that this day could happen. Thank you to the Rotary Club of Fullerton, FLOCK, The John H. Grace Foundation, Lyon Living, Quickbridge Funding, Farmers & Merchants Bank, RAI Wealth Management, Antioch Church, CRAINCO. Inc, and many other sponsors that made our event so successful.

Without our community or our sponsors, we would not be able to continue supporting students like Jose Angel in our United Kids Program.

If you missed out on the Pumpkin Run but want to support OC United’s initiatives, visit us at www.ocunited.org/neighborhoods/ or to find out more about United Kids go to www.ocunited.org/unitedkids.

Chris Baeza is an intern for the Creative Team at OC United.
If you would like to contact Chris, you can email him at chrisb@ocunited.org